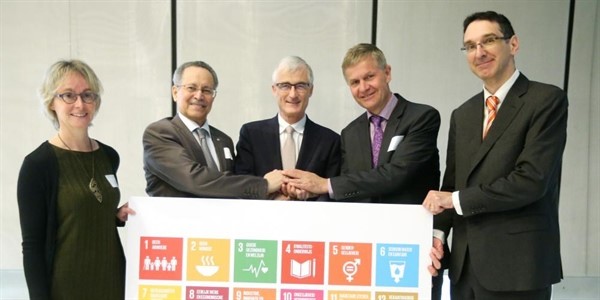 To celebrate its decade long partnership with Malawi, the Government of the Belgian region of Flanders hosted on September 7, 2017 in Brussels, Belgium an event aimed at presenting and discussing about this fruitful collaboration, as well as outlining its vision of development cooperation and its strategy towards achieving the SDGs in the context of Agenda 2030.

With the aim to contribute towards the successful achievement of the Sustainable Development Goals, the Government of Flanders has reformed its approach towards development cooperation.  Striving to implement a policy framework compliant with the 2030 Agenda for Sustainable Development and having adopted its related ‘leaving no one behind’, Flanders has decided to establish a systemic approach focusing on innovation, multi-actor partnerships and an enhanced role for the private sector.

In coordination with the United Nations, the European Union and the OECD, the Flemish Government chose to focus on three partner countries in Southern Africa, namely Malawi, Mozambique and South-Africa. The narrow selection of countries is based on the fact that the Flemish Government believes that its support must maximize the benefits with the modest available funds. Therefore, the Government believes that by focusing on niche sectors, starting pilot projects and developing new financing mechanisms in a small number of countries, a wider range of results can be attained with the limited resources that are available.

In terms of innovation, the Flemish Government believes it can act as a catalyst. By targeting the agricultural sector and advancing the technologies that are available to the local farmers and improving their access to the markets, the Flemish Government hopes to increase the household livelihoods, improve the food security and ultimately to help alleviate poverty levels. It is therefore cooperating with the respective ministries of agriculture of the focal countries and several multilateral organizations and NGOs.

2030 Agenda: from global emergencies to solutions(...)

The Decade of Action - bolstering change from the(...)