Brazil steps up its efforts to implement the 2030 Agenda 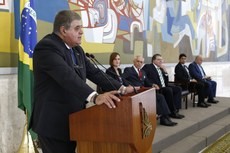 Source: Secretariat of the Presidency of the Republic of Brazil webpage

On March 1, 2018, the Minister of the Secretariat of the Presidency of the Republic of Brazil, Mr. Carlos Marun, presented the work being promoted by the Brazilian National Commission for Sustainable Development Goals (SDGs) in a ceremony that took place at the Planalto Palace, in Brasilia.

The National Commission for the SDGs was established by the Presidential Decree 8.892, published on October 2016, as an institutional mechanism supporting the promotion, implementation and monitoring of the 2030 Agenda for Sustainable Development in Brazil. The three levels of government and civil society are represented in the commission, which works as an inclusive and participative advisory body to internalize, disseminate and give transparency to the actions being taken to achieve the SDGs.

Thematic Chambers were also envisioned by the Presidential Decree 8.892 to allow the development of technical studies and preparation of proposals to improve public policies, as well as to subsidize the decisions of the National Commission in its recommendations to the Presidency of the Republic. During the ceremony, the Thematic Chamber “Partnerships and Means of implementation” was formed and a Committee was created to establish the conditions and terms for its effective functioning.

The event also marked the launch of SDGs Brazil Award, which will recognize and value local best practices that are contributing to the achievement of the SDGs. It is ultimate goal is to encourage the implementation of sustainable projects that will stimulate relevant public policies.

Moreover, the Minister used the occasion to promote the 2017-2019 Action Plan of the National Commission for the SDGs. The plan aims to create tailored institutional mechanisms that will ensure appropriate conditions for the implementation of SDGs in the country. This includes the development of strategies, processes and actions to implement and monitor the Agenda 2030. Five strategic axes compose the plan: Management and Governance of the Commission, Dissemination of the 2030 Agenda, The Brazilian 2030 Agenda, Territorialization and Tracking and Monitoring.

Among the strategies already in place, few can be highlighted: the alignment of the SDGs to the national context; the definition of national SDGs indicators; the development of tools to promote the SDGs; and the creation of processes and initiatives for the localization of the Agenda 2030 throughout the national territory.

*Further information about the event can be found at the Secretariat of the Presidency of the Republic of Brazil webpage. To access it, please click here.