French decentralized cooperation in favor of achieving the SDG5

At the last Interministerial Committee for International Cooperation and Development (CICID) of 8 February 2018, France reaffirmed its commitment to gender equality; the President of the Republic, Emmanuel Macron, has made it one of the stakes of his quinquennium. The government has also adopted France's international strategy for equality between women and men 2018-2022. It aims to put an end to all forms of discrimination and violence against women and girls, to support the empowerment of women, including financial, and to support countries in their demographic transition (sexual and reproductive health, education girls, etc.).

In this context, local authorities, as public institutions of proximity, are key players in making the SDG5 "gender equality" a reality for the territories and the citizens. The French communities are particularly committed to their territory in favor of equality - more than 260 French communities are signatories to the European Charter for the Equality of Women and Men in Local Life -, but also to the international community. link with their partner communities - 22.3 million euros in official development assistance to French local authorities have had a positive impact on gender equality in 2016! 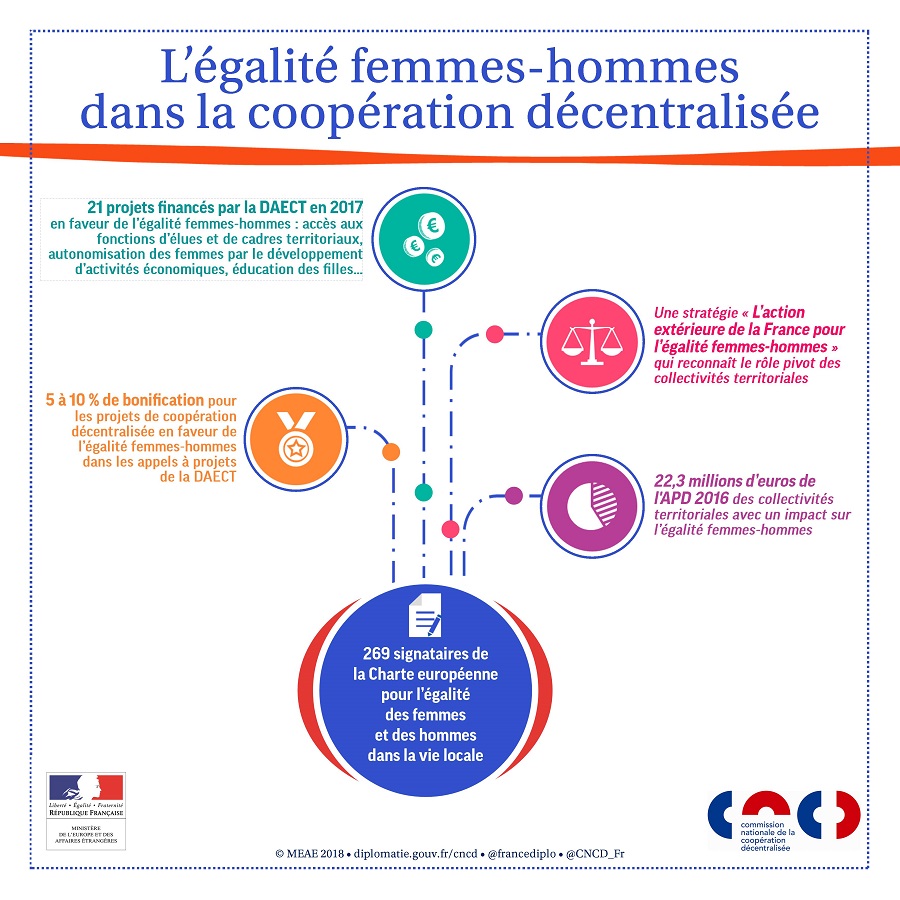 The French Ministry of Europe and Foreign Affairs encourages French local authorities and their partners to put this approach at the heart of their decentralized cooperation partnerships, as a major challenge for the development of a territory, but also as a factor key to the success of a project: to involve women in decentralized cooperation projects, regardless of the theme, is thus to participate in their empowerment, the strengthening of their capacity but also to the internationalization of the whole territory . Through the exchange of good practices and the systematic consideration of gender equality as a factor in the socio-economic development of a territory, decentralized cooperation makes it possible to address the concept of gender equality. innovative way, while questioning our practices in both North and South.