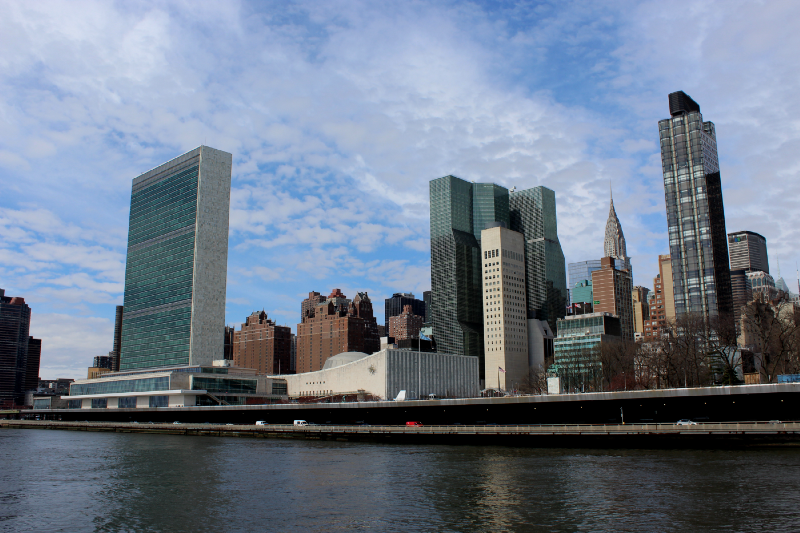 On April 20, Mayor Bill de Blasio announced major progress in efforts to make New York City the fairest big city in America. The 2018 OneNYC progress report shows that since the launch of our groundbreaking strategic plan in April 2015, we have made NYC’s air and water cleaner, achieved record job and wage growth, and tripled the number of children in free Pre-K, among other accomplishments. The report also identifies steps that remain in order to fully achieve the ambitious goals laid out in OneNYC.

The 2018 OneNYC progress report marks a significant moment for New Yorkers. However, these ambitions to be resilient, equitable, and sustainable are not unique to our city. In 2015, countries around the world met at the United Nations and agreed to meet similar goals by 2030 through the 17 Sustainable Development Goals (SDGs).

What does New York City’s progress mean to other cities and countries which are also committed to improving livability for their residents?

This summer, New York City will become the first city in the world to answer this question by reporting directly to the United Nations on efforts to achieve the SDGs. We will share our progress in a format that is accessible to the UN community as well as the many other groups following the SDG process.

“New York City is showing how localities across the country can implement the UN’s Sustainable Development Goals. Through OneNYC, we’re implementing a bold strategy to make our city more sustainable, equitable and healthier. Our approach is working: our air and waterways are cleaner than ever, we’re creating opportunity for New Yorkers across the city, crime is at an all-time low and we are tackling the challenge of climate change. We look forward to continue working with municipalities across the nation and the world to learn from them and share the strategies that have succeeded here,” said Mayor de Blasio in the announcement of this new initiative.

Every July, countries gather at UN headquarters in New York City for the High-Level Political Forum to address the status of the SDGs. All countries are invited to present a Voluntary National Review (VNR), which is a report that describes their progress on the SDGs so far. In summer 2018, 47 countries will participate by presenting a VNR.

Modeled after these VNRs, New York City will submit a Voluntary Local Review (VLR) looking at our progress on a set of key SDGs. The VLR will reflect on our successes and identify areas where we can learn from others about how to address the remaining challenges.

This effort could not be more urgent. Today, more than half the world’s population lives in cities, and that share is expected to reach two-thirds by the year 2050. Cities are also where the challenges of climate, inequality and other issues are often felt most deeply, and where innovative solutions are being developed through partnerships and collaboration between local governments, nonprofits, and the private sector.

Moreover, some national governments are stepping back from this critical work. As that happens, the role and voice of cities is ever more important as we take up this responsibility and engage in the global conversation.

“Since 2015 — the year the global community agreed to the Sustainable Development Goals — New York City has been a pioneer in localizing the SDGs, from sharing best practices through the Global Vision | Urban Action program to engaging youth on global issues through the NYC Junior Ambassadors program. Given our strategic commitment to the SDGs, it is fitting that New York City is the first city to publish its progress through a Voluntary Local Review,” said Commissioner for International Affairs Penny Abeywardena. “By taking this historic step, we are connecting New Yorkers to a global conversation through the shared language of the Sustainable Development Goals. The Voluntary Local Review reflects our commitment to the values of fairness, inclusion and cooperation, especially at this critical time when our national government and some others are retreating from this urgent dialogue.”

What we are doing:

We are not waiting until we release the VLR in July to take action. In December 2015, the NYC Mayor’s Office for International Affairs established Global Vision | Urban Action to identify the links between OneNYC and the SDGs, and since then, we have hosted a number of events, panel discussions, and tours to discuss how NYC is localizing the SDGs.

Starting this year, the Mayor’s Office for International Affairs began a series of site visits for the world’s largest diplomatic corps to learn firsthand about how our city is addressing the five SDGs that will be the focus of the High-Level Political Forum this summer.

In February, a group of UN staff and diplomats visited the Sims recycling center in Brooklyn to learn about SDG 12, focusing on responsible consumption and production. Last week, another group took a closer look at wastewater treatment, addressed in SDG 6 on clean water and sanitation, by boarding an NYC sludge vessel and traveling around the waterways of the five boroughs. And we have more to come.

Recognizing that cities around the world are also responding to the challenges laid out in the SDGs, New York City welcomes collaboration with those who are interested in mapping their local actions and reporting on them at the global level. By using the common language of the SDGs to discuss our shared successes and challenges, we hope that people and governments around the world can work together to achieve all 17 SDGs by 2030.

The story was originally published on Medium at this page.