Social and Solidarity Economy for the SDGs: Spotlight on the Social Economy in Seoul 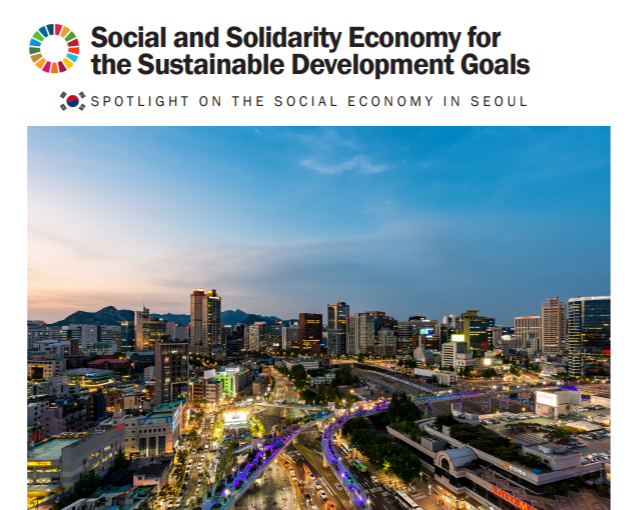 The UN Research Institute for Social Development (UNRISD) is currently implementing a project, whose purpose is to examine the social economy (SE) in Seoul, Republic of Korea, and how it is contributing to implementing and, ultimately, achieving, the city’s “localized” SDGs. Characterized by a rapid development of proactive SE policies, dramatic growth of SE organizations and enterprises, and the Seoul Metropolitan Government’s strong commitment to the Sustainable Development Goals (SDGs), the city’s experience offers a valuable opportunity to further enrich understanding of social and solidarity economy as a means of implementation of the SDGs. This is the first case study of a series of research projects on SSE and the SDGs which UNRISD is planning to undertake.

The Research Issue in Context

The 2030 Agenda for Sustainable Development emphasizes the need to “achieve sustainable development in its three dimensions—economic, social and environmental—in a balanced and integrated manner” (UNGA, 2015, para 2). This implies that business-as-usual approaches are no longer an option if the “transformative vision” of the Agenda is to be realized and the interconnected challenges facing humanity are to be addressed. A more transformative, innovative and inclusive approach to development needs to be pursued instead.

In recent years attention has increasingly been turned towards the social and solidarity economy (SSE) and its approaches to sustainable development that incorporate social, economic and at times environmental objectives in an integrated and balanced manner. SSE has the capacity to address some of the structural underpinnings of vulnerability, exclusion and unsustainable development. Its integrated nature means it could potentially contribute to the realization of the 2030 Agenda and the SDGs with their overarching principle, “leave no one behind”.

This potential relationship between SSE and the SDGs has yet to be thoroughly explored. The available knowledge is largely based on either heuristic exercises matching areas of SSE intervention with specific SDGs, or conjecture about SSE's potential in particular cases. Often ignoring the underlying political economy, institutional and cultural factors—or, indeed, the enabling environment for SSE—such matching exercises and conjecture are less useful for policy makers and practitioners interested in how and to what extent SSE can contribute to the SDGs. The research on the social economy (SE) in Seoul and its contribution to implementing and, ultimately, achieving the localized SDGs offers a valuable opportunity to build the evidence base and enrich our understanding of SSE as a means of implementation for the SDGs.

This project aims to generate evidence and analysis that will enrich our understanding of the social economy in Seoul and its role in implementing the city’s localized SDGs. In doing so it will contribute to dialogues and strategies on SSE and the SDGs more broadly. Specifically, the proposed research will deepen the understanding of:

For further information on the project and related outputs and activities visit: unrisd.org/sse-sdgs-seoul