Mannheim 2030 – Tailoring the 2030 Agenda to local interests and needs 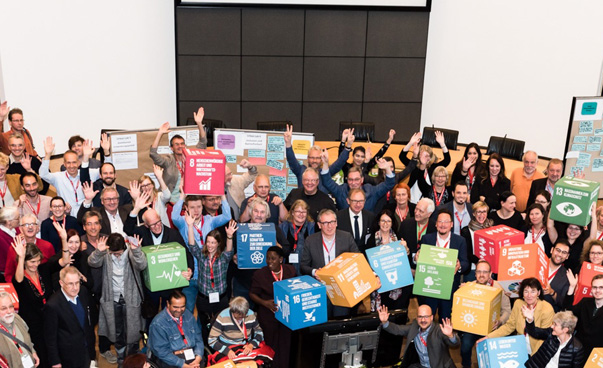 At the beginning of 2016, the city of Mannheim, Germany, hosted its first Urban Thinkers Campus (UTC) entitled “Urban Citizenship in a Nomadic World.” The UTC primarily focused around growing global urbanity and the future of cities. This intensive three day summit resulted in the “Mannheim Manifesto,” which drafted an inclusive vision for global sustainable urban development. Part of this vision is a reconsideration of what Urban Citizenship means; calling for the extension of Urban Citizenship to all residents of the city, regardless of their status. Such inclusivity is paramount to ensure public participation: everyone is affected by decisions reached by the city government, and everyone should have a voice in crafting those decisions.

The city’s intention is to implement both the New Urban Agenda and the 2030 Agenda with its 17 Sustainable Development Goals (SDG) – two international programmes – in conjunction with “The Mannheim Model,” a local device. The Mannheim Model is a collection of eight strategic goals adopted by our city council in 2015 to guide our local urban development. These eight goals consist of (1) Vitalizing Urbanity; (2) Attracting Talent; (3) Strengthening Enterprises; (4) Cultivating Tolerance; (5) Enhancing Equal Educational Opportunities; (6) Enhancing Creative Spirit; (7) Encouraging Engagement; and (8) Enhancing Assets. Each of these goals is tied to a variety of quantitative indicators to let us track our progress and strive towards improvement. To serve this end, the city has begun the process of aggregating these programmes and tailoring the product to the unique challenges that Mannheim is facing. This product is what we call “Mannheim 2030.”

The administrative strategy has thus placed the city in an advantageous position for formulating Mannheim 2030 as it can be informed by the experiences with smaller scale projects in the past. Such projects include the current re-development of the former U.S. Army base Benjamin Franklin Village into a new housing area, the continued emphasis on green development through our forthcoming sustainability report, and the cultivation of creative talent through a variety of art schools and a University for Popular Music and Music Business supported and operated by the city.

Getting started: The Mannheim 2030 process

In order to start the Mannheim 2030 development model with enough time to achieve its goals by 2030, the city administration has prepared a time table to guide our planning process. It began early in 2017, conducting a postal survey asking our citizens to rank the SDGs in order of personal importance. The results of this survey were an important first step and established the theme of citizen involvement that will play an important role for the remainder of the development process.

Citizen involvement is considered to be essential because it is impossible to craft a vision addressing local concerns without the participation of those who live and work in the local area. The city has thus visited a variety of public fora and festivals to present its sustainability management and its approach to realize the SDGs, e.g. at the annual Fair “Maimarkt,” the “Jetztmusik” Electronic Art Festival, a new local forum for discussions of political populism, and a Gender Equality summit at the University of Mannheim to facilitate public dialogue about various SDGs and the future of the city. Each of these platforms was used to inform our citizens about the Mannheim 2030 process, to ask for their input and concerns, as well as to invite them to future public events.

Continued citizen involvement comes in the form of Mannheim’s second Urban Thinkers Campus operating under the working title “Mannheim 2030 – Glocalization of the SDGs” that took place in October 2017. This event attracted a wide array of international and local experts, as well as the city’s citizens. The UTC provided a forum for the discussion of Mannheim 2030 and global sustainable development, and an opportunity for dialogue between experts and the general public.

Realising an inclusive, citizen-oriented vision of our city

The results of the UTC are to be included in the next stage of the development process: a full year of consultation and collaboration with city interest groups, the political leadership and members of the public. The city believes it necessary that the international perspective and influence of the UTC must be tailored to local interests and concerns through such an extended period of public dialogue. The end result of the entire process will then be presented to our city council for its consideration and amendment, ensuring that Mannheim 2030 truly represents the communal vision of the city.

The seventh strategic goal of “The Mannheim Model” reads “Encouraging Engagement.” It charges the city to support a population which is motivated and which takes an active role in the decisions that affect them. This goal in particular should guide the way for all communities to develop a vision for their future selves. Long term development models occupy a separate sphere from most other governmental programmes, they require more than the consent and advice of representative elected officials. These models, in essence, are a vision representing the chosen future of a city. If the general population is not intimately involved in the determination of what that chosen future looks like, this vision will not create commitment and collaboration. This is the fundamental lesson from Mannheim’s planned implementation of the New Urban Agenda and 2030 Agenda. Citizens must be made an active part of this process.

From October 17th to 19th the city will host an international SDG expert forum together with Mannheim’s twin cities. Experts from different European and non-European countries will evaluate together with national experts Mannheim’s approach towards localizing the SDGs and show best practices from their cities how to implement the UN 2030 Agenda on local level.

Further information can be found here and here.