Quito develops its communication strategy of the Sustainable Development Goals 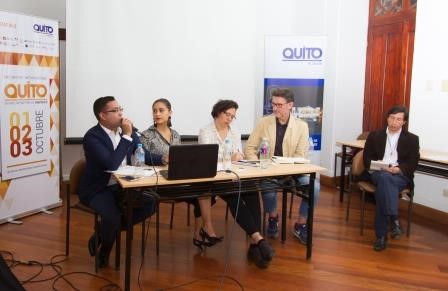 On October 3, the last day of Habitat III + 2 , a series of dialogues and reflections on strategies and successful experiences for learning and localization of the Sustainable Development Goals (SDGs) and the methodologies proposed by United Cities and Local Governments (UCLG), in collaboration with the United Nations Development Program (UNDP) and UN-Habitat, for the training of technicians and public awareness of the SDGs in the territory.

The meeting was attended by representatives of the local governments of Sao Paulo, Quito and the Mayor of the Royal Site of San Ildefonso, also representing the Spanish Federation of Municipalities and Provinces (FEMP), who presented their successful experiences in localization of the SDGs.

This series of events began with the official presentation of the "Communication strategy for the participatory localization of the SDGs" prepared by the Metropolitan Directorate of International Relations within the framework of the Comprehensive Cooperation Program maintained by Quito with the UCCI and the Madrid City Council that showed the existing potential in several participatory spaces based on a paradigmatic change for the relationship between citizen leaders and officials committed to citizen participation.

50 municipal officials attended the session, who are part of the ODS Localization Training Pilot Project carried out by the municipality since March of this year.

The news was originally published in the bulletin of the Municipality of Quito.