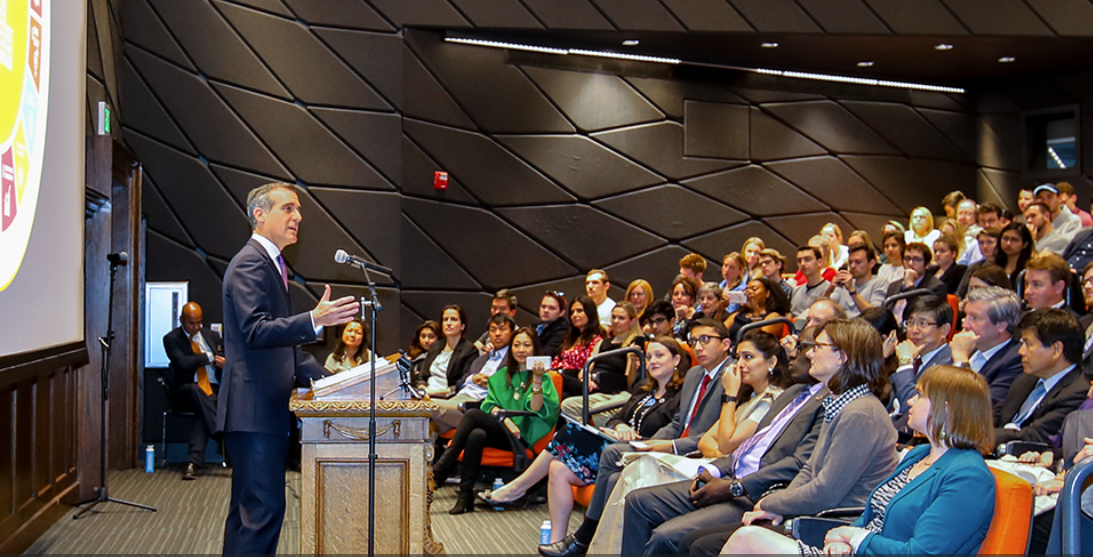 Partnership will help City collect data and track progress on broad range of economic, environmental, and other targets adopted by United Nations members

LOS ANGELES — Mayor Garcetti announced in Februrary 2018 a new partnership to accelerate L.A.’s pursuit of the Sustainable Development Goals (SDGs) adopted by members of the United Nations to end poverty, protect the planet, and broaden prosperity.

The collaboration with Occidental College, announced during a speech on the Eagle Rock campus, will look at how the City can incorporate the SDGs into planning and more effectively allocate resources toward meeting these targets. It will also assemble a network of like-minded cities around the globe to share best practices and lessons.

“Los Angeles can, should, and will lead in building the healthier and more prosperous world that we dream of for our children and grandchildren,” said Mayor Garcetti. “Our partnership with Occidental College matches that commitment with the brainpower, research, and data collection that will keep us on target to reach for the highest goals.”

The SDGs were adopted in 2015 by all 193 members of the United Nations. There are 17 goals in all, calling on the public, private, and non-profit sectors to address challenges that range from ending hunger and reducing inequality, to building resilient infrastructure and combating climate change.

Mayor Garcetti has also co-signed a memorandum with the World Council on City Data (WCCD), establishing L.A. as one of eight local data hubs for sharing information related to the SDG indicators. Occidental teams are already utilizing WCCD’s data standards to bolster their efforts.

In Fall 2017, the Conrad N. Hilton Foundation funded an initial grant to support L.A.’s efforts to advance the SDG goals, allowing the Mayor’s Office of International Affairs and the Mayor’s Fund for Los Angeles to collaborate on building partnerships and collecting data to measure how current plans and programs line up with the SDGs.

“Measuring Los Angeles’ progress toward meeting the UN’s Sustainable Development Goals will be a powerful tool for the City as we work with community organizations and the private sector to improve the lives of all Angelenos,” said Nina Hachigan, Deputy Mayor for International Affairs. “We are excited to learn from our partners around the world as we share our successes and failures in the pursuit of these Global Goals.”

Dr. Sanjeev Khagram, the John Parke Young Chair in Global Political Economy, leads Occidental College in this partnership with the City. The College’s faculty and students have already begun working with local officials and other stakeholders to map the City’s efforts around the SDGs.

“I am honored to support Mayor Garcetti, Deputy Mayor Hachigian and their amazing team in this ambitious effort,” said Dr. Khagram. “Later this spring we will begin convening stakeholders from across the entire community to contribute to making L.A. a leader in achieving the SDGs. Angelenos will and must be the direct beneficiaries of our efforts, but we will also assemble a set of practices with our partner cities that can be adapted by municipalities all around the world committed to the Global Goals.”

The news was originally posted on this page.