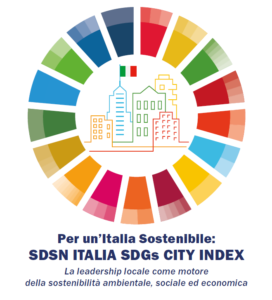 On November 29th, 2018, SDSN Italia hosted a conference entitled “For a Sustainable Italy: Local Leadership as a Driver for Sustainability” at SDSN Italia’s host institution Fondazione Eni Enrico Mattei (FEEM). The event aimed to provide local administrators the opportunity to learn from the valuable experience of stakeholders in Italy who have been influential in steering sustainable development policies in various institutional and political frameworks. The conference was also the occasion to present SDSN Italia and FEEM’s report “Per un’Italia sostenibile: l’SDSN Italia SDGs Cities Index.” You can access the full agenda of the event here.

The event began with a welcome address from Paolo Carnevale, Director of FEEM; Massimo Gaudina, representative of the European Commission; and Laura Cavalli, Manager of SDSN Italia who together stressed the value and importance of local actors in achieving the SDGs.

The welcome was followed by a virtual appearance from Guido Schmidt-Traub, Executive Director of the SDSN, who spoke on the challenges and opportunities that arise from the universal adoption of the SDGs in 2015. He highlighted the potential of using the SDGs as a report card to measure development progress, as a framework to mobilize national actors, and as a management tool to help steer local and national decision making. He added that local authorities can be instrumental in achieving the SDGs in view of their proximity to the local issues and commended SDSN Italia for championing an SDG Cities Index report for Italy to empower these important local actors.

Marco Carnaccini, European Commission – DG Budget, then followed with a presentation entitled “Implementing the SDGs through the Next Multi-Annual Financial Framework.” He spoke to the importance of a well-calibrated budget to achieve the political goals of the SDGs and provided updates on the Commission’s “Action Plan” for financing sustainable growth. The action plan will be integrated into the Commission’s upcoming report “Towards a Sustainable Europe by 2030” that will be presented at the United Nations High-Level Political Forum (HLPF) in July 2019. Thereafter, Marco Zappalorto, Nesta Italia, discussed innovative approaches initiated by Nesta Italia to achieve sustainable development in Italian territories. He highlighted the role of culture and the power of marrying technology with education to stimulate new ideas that encourage healthy, sustainable communities.

After a short break, Laura Cavalli presented SDSN Italia’s SDG Cities Index highlighting that according to United Nations estimates, in 20 years, the percentage of the world population that will live in urban centers will be 80% of the total population; and that currently, roughly about 75% of Italy’s population lives in urban areas. She continued by sharing her hopes that the Italian Cities Index will serve as an analytical planning tool for cities to encourage reflection on policies that can address population growth while at the same time helping bear in mind the achievement of the Sustainable Development Goals (SDGs).

The report highlights the degree of SDG implementation in Italian municipalities and features select indicators specific to the Italian context which can be used to monitor and measure SDG progress at the sub-national over time. The ultimate aim of the report is to help guide policy-making decisions at the municipality level to enable further alignment with Agenda 2030. It examines 101 provincial capitals on 16 of the 17 SDGs, using 39 elementary statistical indicators. SDSN Italia’s SDGs City Index shows that – by setting 100% the full achievement of the international targets of the SDGs – on average, Italian cities have reached 53%. The report highlights that of the 101 cities analyzed, none has reached more than 80% of overall achievement of the SDGs.

The presentation of the Index was followed by a round-table discussion speaking on the importance of local leadership on the SDGs as a motor for the implementation of practices and cohesion of policies that foster sustainable development. The discussion was moderated by Laura Cavalli, and saw participation from; Walter Vitali, Executive Director of Urban@it and former mayor of Bologna; Arianna Censi, Vice Mayor, Metropolitan City of Milan; Mario Conte, Mayor of Treviso; Marco Marocco, Vice Mayor of the Metropolitan City of Torino; and Gianni Bottalico, L’Alleanza Italiana per lo Sviluppo Sostenibile (ASviS).

The event closed with an open debate amongst participants and attendees. The dialogue focused on the importance of all local authorities taking on all of the SDGs rather than reporting success on goals that feed into existing activities and policies. Another aspect of the discussion touched on the need for greater interconnectedness between municipalities to enable enhanced dialogue around the SDG achievement that respects the nuances of the respective local political contexts and culture.

The article was originally published by SDSN on this page.