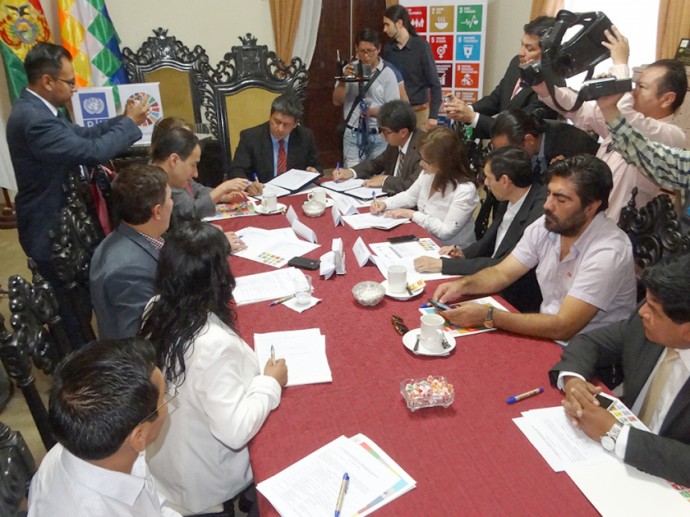 Sucre is the first city in Bolivia to build a "Strategy for locating the Sustainable Development Goals (SDG)" with the support of the United Nations Development Program (UNDP). For this reason, the Mayor's Office yesterday formed a Driving Group (GI) with the participation of local institutions, among which is the newspaper CORREO DEL SUR.

The SDGs are framed within the 2030 Agenda and will stimulate a coexistence and culture of peace, within the framework of territorial and national planning based on a novel experience of the Madrid City Council. With the signing of an act, this initiative of the municipal government was joined by five institutions considered representative of society: the San Francisco Xavier University, the Chamber of Industry and Commerce of Chuquisaca (CAINCO), the Juana Azurduy Center and CORREO DEL SUR.

The interim resident representative of the UNDP in Bolivia, Maribel Gutiérrez, said that Sucre is the "ideal" city for this purpose in comparison with the large cities that, in their opinion, can be unmanageable.

At the ceremony, Mayor Iván Arciénega stressed that the city will be part of the few Latin American capitals that are concerned about this type of contributions in terms of health, education, environment, violence and others.

How will it work? The objective is to identify the urban problem so that the municipal government translates it into public policies.

Previously a diagnosis of urban violence will be made, both in the districts of the city and the rural area, to involve the city's neighbors in the 17 SDGs.

There will be quantitative surveys and a qualitative methodology centered on citizen participation will be applied.

Then, "listening circles" will be held by districts, in which a maximum of ten neighbors of different social status will identify the problems of their neighborhoods.

UNDP announced that from February 4 to 9 two Spanish experts will announce in Sucre more details of this innovative project.

The news was originally published on this page .