The role of decentralized cooperation to address rising inequalities 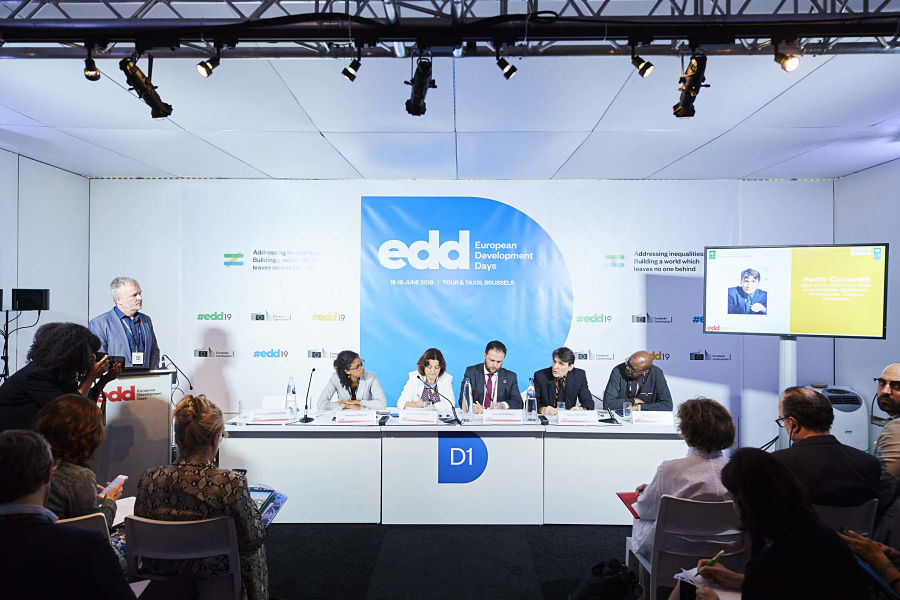 Within the framework of the European Development Days (EDDs), which were held in Brussels during the 18-19 of June 2019 and congregated hundreds of participants invested in development from all across the world, the Andalusian Agency for International Cooperation for Development, in collaboration with the United Nations Development Programme (UNDP) and Plataforma, conduct a session on “The role of decentralized cooperation to address rising inequalities”.

The session, which was moderated by Mr. Johannes Krassnitzer, coordinator of UNDP ART Initiative, counted as well with the participation of other leading figures:

The session’s objective was to discuss in what way the 2030 Agenda presents an opportunity to address shortcomings that are still inherent in development cooperation models and to what extent such findings are applicable to the overall decentralized cooperation modality. Reflecting upon this question, and opening the session, Ms. María Luz Ortega focused her intervention on addressing inequalities through the search of a human development which has to be “holistic, intra-generational and intergenerational”.

Mr. Paolo Ciccarelli introduced the audience to the role and actions of DEVCO, highlighting that “the goals we have set ourselves cannot be fulfilled without the local level. We have tried to establish partnerships between stakeholders that do not only look at the vertical dimension, but also the horizontal level, taking into account specifically the territorial context”. In the follow-up to this intervention, Ms. Marlène Siméon pin-pointed the vital importance of the local context to achieve the 2030 Agenda by highlighting the role of the territory in “providing a better life for citizens with whom they have to engage”.

In his intervention, Mr. Eddy Maloka regretted the little progress made in the African continent with regards to Decentralized Cooperation offering, nevertheless, a five-tier commentary on the current situation, focusing on; 1). Avoiding development partners from getting too involved in national politics; 2). The importance of aligning local and national planning; 3). The relevance of developing adequate monitoring and evaluation processes; 4). The necessity of becoming self-reliant and self-sustainable and, lastly; 5). The increasing importance of cities, as territories that are seeing a vast increase in population settlement, and the benefits of sharing best-practices amongst development actors.

Bringing the voice of the National Government of Spain, Mr. Gabriel Ferrero deepened in the vital role the regions and provinces play in a decentralized country such as Spain, sustaining that “The International cooperation and its decentralized character must be sustained from the local level, as many facets cannot be developed from the ministries or any central body, but only from the local level itself”. Mr. Gabriel Ferrero closed his intervention reminding the audience that “the 2030 Agenda is impossible to achieve without decentralized cooperation”.

The session also counted with interventions of the audience, of whom we can highlight the participation of Mr. Antonio Zurita (General Direction of International Action and Global Citizenship of the City of Madrid), Mr. José Ángel Calle (Director of the Extremadura Agency for International Cooperation and Development), Ms. Aina Calvo (Director of the Spanish Agency for Cooperation), Mr. Carl Wright (Secretary-General Emeritus of the Commonwealth Local Government Forum ) and Ms. Silvia Tostado (Vice-President of Fundación Triángulo).  These interventions, together with the questions coming from the floor added to the discussion in drawing attention to the necessity of localizing the SDGs while searching for bottom-up multi-stakeholder approaches to reduce inequalities.

To conclude, Ms. María Luz Ortega offered the closing remarks thanking the participation of both the panel and the audience and pleading everyone to “recognize where we stand” while aiming at “not leaving anyone behind and finding paths we can walk together”.

If you are interested in listening to what was discussed, please find the podcast of the session here: https://bit.ly/2XCrZfW