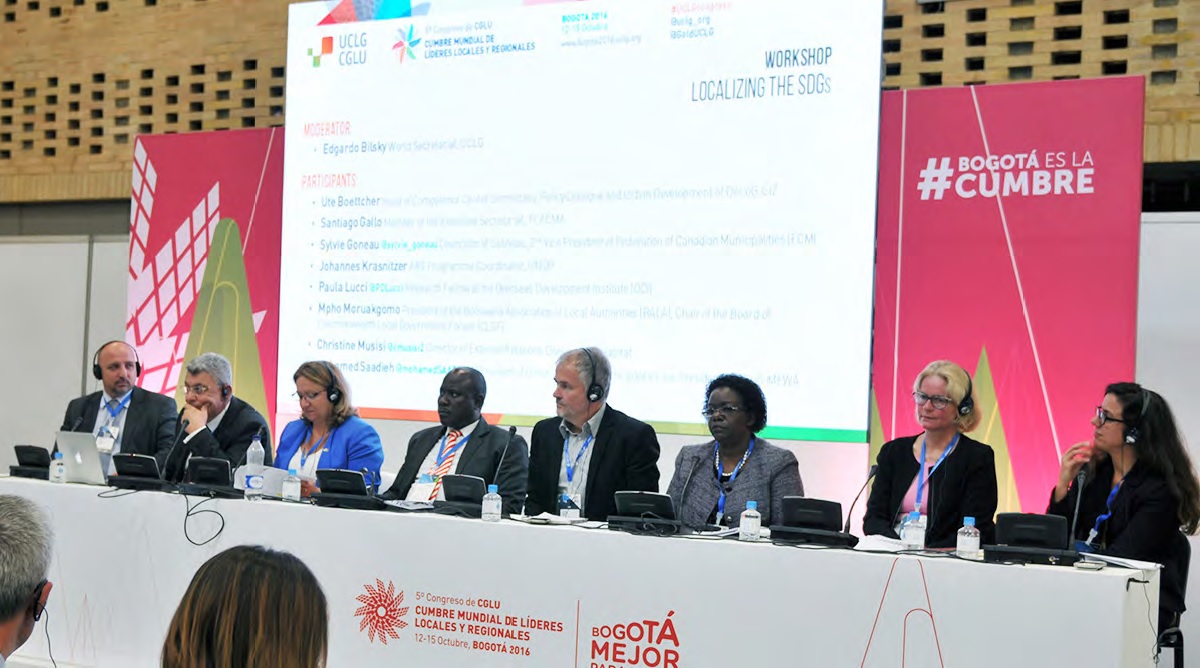 Local and regional governments, their associations and International Organizations discuss together about  their experiences in initializing the SDGs localization process during the World Summit of Local and Regional Leaders, Bogota, Colombia.  Photocredit: IISD Reporting services, UCLG

The 2016 World Summit of Local and Regional Leaders convened 12-15 October 2016 in Bogotá, Colombia, under the theme ‘Local Voices for a Better World.’ The World Summit, organized by United Cities and Local Governments (UCLG), hosted over 5,000 mayors, councilors, representatives of local governments, international organizations, and other interested policymakers, practitioners and citizens.

As part of the Summit, a dedicated SDGs Localization Workshop was organized by the United Nations Development Programme (UNDP), the UN-Habitat, the Federation of Canadian Municipalities (FCM), and the Association of Netherlands Municipalities (VNG).

The workshop offered an opportunity to discuss issues as well as existing initiatives and challenges encountered so far in the localization of the SDGs in different contexts, with the objective of exploring ways in which national, regional and local governments, civil society, practitioners and academics can best collaborate to achieve the SDGs.

Johannes Krassnitzer, from UNDP explained that development actors are in the process of understanding the dynamics of implementing the SDGs and identifying bottlenecks and challenges, which leave room for critical thinking and analysis. Paula Lucci, from the Overseas Development Institute (ODI), pointed out the complex task of prioritizing targets and indicators based on regional and local contexts.

Mpho Moruakgomo, of Botswana Association of Local Authorities, called for a focused implementation and for contextualizing and localizing international development agendas.

Christine Musisi, of the UN-Habitat, explained that the New Urban Agenda will provide an action-oriented document with specific drivers, to achieve the 2030 Agenda and ensure sustainable urban development. Ute Böttcher, Development Partners Network on Decentralisation and Local Governance (DeLoG), presented examples of participatory planning processes to support the integration of the SDGs into local development plans.

Sylvie Goneau, of the Federation of Canadian Municipalities (FCM), shared experiences to engage citizens through a system of evaluations and a social media campaign, while Santiago Gallo, of La Federación Latinoámericana de Ciudades, Municipios y Asociaciones Municipalistas (FLACMA), presented a recently developed manual to help Brazilian and other Latin American municipalities introduce the SDGs into local indicators of development. Mohamed Saadieh, of the Union of Dannieh Municipalities, recounted the development, despite limited resources due to the Syrian refugee crisis, of a mobile app promoting transparency in Lebanon by sharing the government’s budget, income and spending.

Lastly, Gemma Aguado de la Fuente from UNDP, presented the recently launched Toolbox for Localizing the SDGs, and walked the audience through the different features of the online platform and explained how development actors can access and contribute concrete tools for SDGs implementation at the local level.